Distance to East Midlands Airport is 63.7 miles (approx) from Peterborough, therefore the travel time would be 1 hour 30 min in moderate traffic.

East Midlands Airport (IATA: EMA, ICAO: EGNX) is an international airport in the East Midlands of England, close to Castle Donington, Leicestershire. East Midlands Airport has established itself as a hub for low-fare airlines such as Jet2.com and Ryanair and tour operators like TUI Airways which serve a range of domestic and European short-haul destinations. It is also a base for BMI Regional, Flybe, and Thomas Cook Airlines. Passenger numbers peaked in 2008 at 5.6 million, but had declined to around 4.5 million in 2015, making it the 11th busiest airport in the UK by passenger traffic. A major air cargo hub, it was the second busiest UK airport for freight traffic in 2016 after London Heathrow.

The airport is owned by the Manchester Airports Group (MAG), the largest British-owned airport operator, which is controlled by  Manchester City Council, retaining the controlling stake. 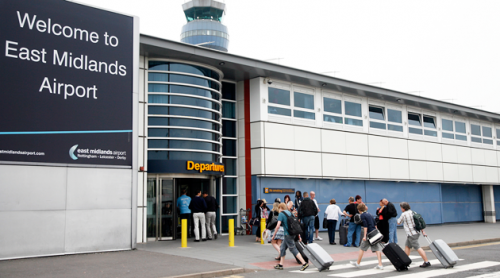 If you can’t find your location on our list contact us. East Midlands airport does have a pickup and drop off charge of £2.50 that would be added to the cost of the journey