Peterborough station was built in 1850 and is largely responsible for transforming of the East England city from a large market town into an industrial hub. These days the station is managed by London North Eastern Railway.

In 2014 Network Rail spent a reported £2.5 million on Peterborough station and its surroundings, in a move that is intended to increase passenger capacity on trains and ease freight movements through the station. This upgrade has seen changes to the booking office and station concourse building along with the introduction of ticket gates. In addition, some refurbishment work and changes have been made to the waiting rooms and other facilities on platform 4/5.

There are regular services to and from London King’s Cross, operated by London North Eastern Railway and by Great Northern. Southbound EC services run either non-stop to the capital or call only at Stevenage: northbound destinations include Leeds, Newcastle Central and Edinburgh Waverley (though many Scottish services now run non-stop from London to York).

Great Northern trains start and terminate at Peterborough (twice each hour with peak period extras Mon-Sat) and serve the intermediate stations southwards. This has now become a Thameslink service largely to and from Horsham.

Below you will find fix prices from and to Peterborough railway station to various places: 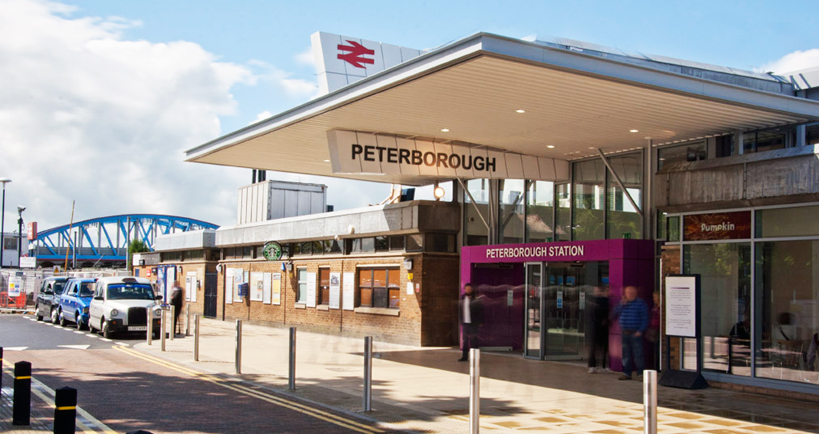 East Midlands Railway are also hourly, between Norwich and Liverpool via Nottingham, Sheffield and Manchester Piccadilly. EMR also operate local services to Spalding, Sleaford and Lincoln on an approximately hourly frequency (though morning peak and evening services only run as far as Spalding).

Sunday services run less frequently on the ECML, but on similar frequencies on the regional routes other than the Spalding Line, which has no service.